I was traveling between West Palm Beach and Boca Raton the other day (actually south of Jupiter) when a tire blew out. Checking my spare, I found that it, too, was flat. My only option was to flag down a passing motorist and get a ride to the next tow The first vehicle to stop was an old man in a van. He yelled out the window, "Need a lift?"

He then asked Republican or Democrat?

"Well, you can just go to Hell," yelled the old man as he sped off.

Another guy stopped, rolled down the window, and asked me the same question..

The driver gave me the finger and drove off.

I thought it over and decided that maybe I should change my strategy, since this area seemed to be overly political and there appeared to be few Republicans.

The next car to stop was a red convertible driven by a beautiful blonde. She smiled seductively and asked if I was a Republican or Democrat.

"Hop in!" replied the blonde.

Driving down the road, I couldn't help but stare at the gorgeous woman in the seat next to me, the wind blowing through her hair, perfect breasts and a short skirt that continued to ride higher and higher up her thighs.

Finally, I yelled, "Please stop the car." She immediately slammed on the brakes and as soon as the car stopped, I jumped out.

"What's the matter?" she asked.

"I can't take it anymore," I replied. "I've only been a Democrat for five minutes and already I want to screw somebody."

Hey Dave do you lay awake at nights thinking this stuff up.....

....by the way I love your sig pic that's good stuff....gmsmkr sig pic is a good one too

The lawyer says to the wealthy art collector tycoon: "I have some good
News and, I have some bad news....

The lawyer says: Well your wife invested $5,000 in two pictures this
Week that she figures are worth a minimum of $2-3 million"

The lawyer answers: "The pictures are of you with your secretary"

Two policemen call the station on the radio.
"Hello, is that you, Sarge?"
"Yes?"
"We have a case here. A woman has shot her husband for stepping on the floor she'd just mopped clean."
"Have you arrested the woman?"
"No sir . . . the floor's still wet."

A while ago a new supermarket opened in town.
It has an automatic water mister to keep the produce fresh.
Just before it goes on, you hear the sound of distant thunder and
the smell of fresh rain.
When you pass the milk cases, you hear cows mooing and there is
the scent of freshly mowed hay.
In the meat department there is the aroma of charcoal grilled
steaks with onions..
When you approach the egg case, you hear hens clucking and
cackling, and the air is filled with the pleasing aroma of bacon
and eggs frying.
The bread department features the tantalizing smell of fresh baked
bread and cookies.
I don't buy toilet paper there anymore.

Where do yall get this stuff from

I was waiting for ladies hygene department or fish isle punch line.

At a bar in New York City the bartender was so sure that he was the strongest man around, that he offered a standing $1,000 bet. The bartender would squeeze a lemon until all the juice ran into a glass, and then hand the lemon to the patron. Anyone who could squeeze two more drops of juice out of it, would win the money. Over the years, many people had tried . . . weightlifters, longshoremen, etc., but nobody had ever been able to do it. One day, a scrawny little fellow came into the bar, wearing thick glasses and a polyester suit. He sat down, ordered a glass of beer, and started looking around the bar. After reading the sign on the wall about the lemon challenge, he said in a small voice, "I was just reading your sign, and I'd like to try the bet." After the laughter had died down, the bartender said: “Ok . . ." He grabbed a lemon and squeezed all the juice he could out of it. Then he handed the wrinkled remains of the rind to the little fellow. The crowd's laughter turned to total silence. As the man clenched his little fist around the lemon, six drops fell into the glass. The crowd cheered, the bartender paid the guy his $1,000 and then asked: "Do you mind if I ask what do you do for a living? Are you a lumberjack, a weightlifter, or what?" The little fellow quietly replied: "I work for the Internal Revenue Service

My doctor told me to start killing people. Well not in those exact words. He told me I needed to reduce the stress in my life. 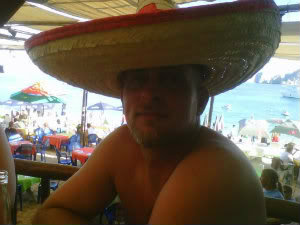 schmitty wrote:My doctor told me to start killing people.  Well not in those exact words.  He told me I needed to reduce the stress in my life.

I prefer to think of it as keeping my ammo supply in circulation.

1. Einstein, Newton and Pascal are playing a rousing game of hide and seek. Einstein begins to count to ten. Pascal runs and hides. Newton draws a one meter by one meter square in the ground in front of Einstein then stands in the middle of it. Einstein reaches ten, uncovers his eyes, and exclaims “Newton! I found you! You’re it!” Newton replies “You didn’t find me. You found a Newton over a square meter. You found Pascal!”

2. A mathematician and an engineer decided they’d take part in an experiment. They were both put in a room and at the other end was a naked woman on a bed. The experimenter said that every 30 seconds they could travel half the distance between themselves and the woman. The mathematician stormed off, calling it pointless. The engineer was still in. The mathematician said “Don’t you see? You’ll never get close enough to actually reach her.” The engineer replied, “So? I’ll be close enough for all practical purposes.”

3. A buddhist monk approaches a burger foodtruck and says “make me one with everything.” The buddhist monk pays with a $20 bill, which the vendor takes, puts in his cash box, and closes the lid. “Where’s my change?” the monk asks. The vendor replies, “change comes from within”.

4. Jean-Paul Sartre is sitting in a cafe revising his first draft of Being and Nothingness. He says to the waitress, “I would like a cup of coffee please. No cream.” the waitress replies, “I’m sorry sir, but we’re out of cream. How about with no milk?”

5. Noam Chomsky, Kurt Godel and Werner Heisenberg walk into a bar. Heisenberg turns to the other and says “Obviously this is a joke, but how can we tell if it’s funny?” Godel replies “We can’t know that because we’re inside the joke.” Chomsky says “Of course it’s funny, you’re just telling it wrong.”

6. It’s hard to take kleptomaniacs and puns seriously. Why? They take things literally.

7. What do you get when you cross a joke with a rhetorical question?

8. Three logicians walk into a bar. The bartender asks “Do all of you want a drink?” The first logician says “I don’t know.” The second logician says the same. The third says “Yes!”

9. A Roman walks into a bar and asks for a martinus. “You mean a martini?” asks the bartender. The Roman replies, “If I wanted a double, I would have asked for it.”

10. Another Roman walks into a bar, holds up two fingers, and says “Five beers please!”

11. A logician’s wife is having a baby. The doctor hands the baby to the dad. His wife asks if it’s a boy or girl. The logician replies “Yes.”

13. How do you tell the difference between a plumber and a chemist? Ask them to pronounce unionized.

15. Pavlov is at a bar enjoying a pint. The phone rings and he shouts “Oh! I forgot to feed the dog.”

17. Shrodinger’s cat walks into the bar and doesn’t.

18. A Higgs Boson walks into a church. The priest says “We don’t allow Higgs Bosons in here.” The Higgs Boson replied, “Well, without me, you can’t have mass.”

19. A programmer’s wife asks him to pick up a loaf of bread and, if they have eggs, get a dozen. The programmer comes home with a dozen loaves of bread.

A father and his young son walk in to a store they have never been in so they are walking up and down the aisle and they come to the condom section of the aisle.

The young boy says.  "what are those"

The father says.  "They are condoms"

The young boy ask why so many?

Apparently I am a dyslexic, agnostic insomniac. I lie awake at night wondering if there really is a dog.

Bill Clinton was driving past the White House when he accidentally ran over the Obama's new puppy, Sunny, crushing it flat as a fritter. He climbed out of his Rolls and sat down on the grass totally distraught. He knew Michele would go ballistic.

Then he noticed a lamp half-buried in the ground. He dug it up, brushed it off and immediately a Genie popped out. "You have freed me from thousands of years of imprisonment," said the Genie, "as a reward I shall grant you one wish."

"Well," said Bill, "I have all the material things I need, but let me show you this dog I just ran over."

They walk over to the splattered remains of Sunny. "Do you think you could bring this dog back to life for me", Bill asked. The Genie looked at the remains and shook his head. "This poor critter is too far gone for even me to bring it back to life, maybe there's something else you'd like?"

Bill thought for a minute, reached into his pocket and pulled out two photos. "I had an affair with this beautiful young girl called Monica," said Bill, showing the genie the first photo. "But I'm actually married to this older, distressed looking woman called Hillary", he showed the genie the second photo. "You see Hillary isn't good looking at all, so do you think you can make her look pretty like Monica?"

The Genie studied the two photographs and after a few minutes said, "Damn man, let's go have another look at that dog."

I've disconnected my home alarm system and de-registered from the
Neighborhood Watch.

I've got two Pakistani flags raised in the front yard, one at each corner,
and the black flag of ISIS in the center.

The local police, sheriff, FBI, CIA, NSA, Homeland Security, Secret
Service and other agencies are all watching the house 24/7.

A husband and wife are shopping in their local Wal-Mart. The husband picks up a ...case of Miller Lite and puts it in their cart.

A few aisles further on along, the woman picks up a $20 jar of ...face cream and puts it in the basket.

What do you think you're doing?' asks the husband... "It's my face cream. It makes me look beautiful,' replies the wife.

Her husband retorts: 'So does 24 cans of Miller Lite and it's half the price....'

A couple, both age 78, went to a sex therapist's office. The doctor asked, "What can I do for you?"

The man said, "Will you watch us have sex?"

The doctor looked puzzled, but agreed.

When the couple finished, the doctor said, "There's nothing wrong with the way you have sex," and charged them $50.

This happened several weeks in a row. The couple would make an appointment, have sex with no problems, pay the doctor, then leave.

Finally, the doctor asked, "Just exactly what are you trying to find out?"