For those who are interested, go to Dragcoverage.com and check out Steve McCall's crash last week at Atmore, AL. It's an in car video. Keep your eye on the passenger side window, and tell me if you think it may have been a contributing cause... Just something to think about when we build racecars.

Luckily, Steve suffered only a broken collarbone and bruising, but his recently completed project is a total loss.

put some real steel doors on it........ plastic fantastic.

My buddy's Hairyglass Corvette doors have a fiberglass frame all the way around the window (as do the 'glass doors on my Maverick).  McCall's deal looked mighty flimsy.  Air does funny things at high speed...especially to a car that's already on the ragged edge of control.

It looked like the catch on the latch was not far enough in the loop to hold right, at the launch it unhooked itself I would just about bet it is what caused the wreck. That is the reason we need all the safety equipment they make use have to run even if we think we don't need it. I did notice it looked like he didn't have gloves I don't wear gloves but they are not required for my slow ride yet. I know I need to get some.

isn't the steering wheel too small?

That wheel's pretty small, but I think the camera angle makes it look even smaller. That's at least a 5" tach mounted above the wheel but it looks pretty small, too.

I think the pass was in trouble long before the door popped open & started slapping the crap out of side of the car and then made a hasty exit.

He never should have got back in the throttle in the first place after peddling it the first time. It was trying to go to the right from the hit (he kept trying to correct back to the left more & more). Then the turned steering wheel finally had an effect, but too much, & the car twitched too hard back to the left. At that point he cranked the steering wheel back right (toward center) and lifted, and shifted into 2nd, and got back in it. That got the small sashay pendulum oscillation action started, which wasn't too bad at first, but it got worse & worse when he got back in the throttle & tried to charge to the finishline. Then when the sashay dance got too much & he lifted the second time I could swear he also pulled the shifter back down into 1st gear instead of pushing to neutral (he pushed the shifter forward 1st to 2nd, but then pulled the shifter backward, and then forward quickly when he lifted the second time). If he did pull it back into 1st gear at the finishline that could explain why the car went from small sashay/swing back & forth, to swinging wildly, and then suddenly swapping ends, digging in, & rolling. 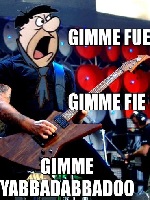 I was thinking the same thing Dave... Why was he pulling the shifter back into low gear? If anything, (if he had one) why wouldn't you pull the chute? I realize alot goes on in these situations, but IMO, there ain't NO race worth winning if there's as good of a chance of wrecking the car as there was in this situation...

That car must have been put together w/paper clips. Parts were falling off before he ever made contact w/anything.

bbf-falcon wrote:That car must have been put together w/paper clips. Parts were falling off before he ever made contact w/anything.

It's typical body carnage sometimes seen with a low slung all 'glass bodied car. Once you get one of these combos turned sideways enough for the sliding slicks to stop sliding & dig-in good and start to roll the sidewalls under the rim, the rocker panel/bottom of the body drags the ground and is peeled off the car. Then the rest of the 'glass body on that side of the car is now all loose & flapping around. At that point if the chassis does continue the roll-over (side-to-roof), on the ground the loose flapping body is shredded & peeled off the chassis like the skin off an orange. And if it's rolling/spinning in the air (off the ground) the centrifugal force (sp?) is trying to pull the loose body panels off & eject them no matter how well they might have been attached in the first place.

The body sections leaving the chassis can be a good thing in a crash since every part that leaves the car during a crash takes with it some amount of stored energy/inertia.

You guys are sure enough right. He DID pull the shifter back to low gear, if even for a second. What better way to knock a car loose than to hit low gear at high speed.