I have 2 sets of motorsport 10 bolt A-460 heads for sale. The first set has tit. intake valves
the second set has s.s. valves. both have new springs and surfaced with valve job. work
done by Porter racing heads, also 2 tit valves were replaced on inspection I ran these heads
last year 10 qm runs. the s.s heads are fresh. also one s.s. head had a sparkplug thread repair
done by porter racing heads. both flow in the low 420s at .700 the first set of heads that sell
come with a set of used comp. cam solid roller lifters, and both sets come with push rods.
2500 for the tit. intake heads and 2000 for the s.s heads plus the ride.

I am open to fair offers on these heads, I have a lot of money in new springs ect.. The reason
for selling is I purchased a premier 18 bolt block and want to get 18 bolt trickflow heads.

If I had the money it would not be for sale anymore. JS 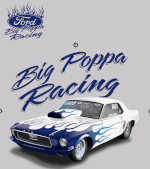 Thanks, I don't know why they have not sold these are nice heads!

Do you still have the heads? Interested in the ones with ss valves.