It's really amazing how reliable most newer cars have become. Even cheap econo-boxes. Just jump in it and go with no prep or thought.

Old cars, not so much. Guess it was that way back in the day too. No overdrive, carbs, points, etc.

Decided to take a road trip with a friend today. We were going to meet up with some friends and go to Chattanooga for the Coker Tire Spring cruise in. I'm not normally a car show guy, but this event is huge and there would be some cool rides. No heads up racing close today, so said what the heck. Spent the last couple of days getting my 67 Fairlane GTA ready. Shined up, fluids and air ok, even a total rebuild on the 3X2 carbs on the 390. Loaded a toolbox, carb gaskets, fluids, even a spare water pump. Prepping it for the longest single day trip the car has made in the 5 years I've owned it. About 360 miles round trip. Previous long trip was 220 last August in 90°+ temps

Left home about 4:15 this morning. Went about 50 miles. (was about 3 miles from David Willingham's). Cruising along, two lane highway, running about 55, 2500 rpm , 170° engine, 50 psi oil pressure. Still dark about 5am. Transmission slipped slightly a couple of times and then within a mile it quit pulling altogether. Coasted into the lot of a shut down gas station. Nothing in any gear. Forward or reverse. Checked the fluid. A tad low, but not bad. Added a little fluid (fun making a funnel from a drink bottle) Think it may have boiled a little out. No major leaks under the car. Fluid was VERY hot, but no burned smell at all. Had a few bubbles but not really foamed up. Made a call and got someone to come get us. Got home at 8am. Hooked up the F350 and the race car trailer. Went back, car had cooled but still no gears. Winched it up in the trailer and came home. Unloaded and pushed it backwards into the garage. Cooled off, checked the fluid and not running it shows a little overfull. No burned smell at all for the Type F fluid in the C6.

So, what happened? Thinking converter or trans pump. Converter is a TCI 12" Sat Night Special. 1800-2000 stall per their info behind my mildly modded 390. Trans was rebuilt about 3K miles ago. Took it out and took it to a builder for a bench build since it needed a couple hardparts that I didn't have. He also put a Transgo shift kit. Put the new converter in at this time. On install, I noticed the converter to flexplate clearance was not as much as needed. with it fully seated it was right up against the flexplate, but would still turn easily. Wasn't in a bind even with the trans bolted up. But, no gap. I knew better, but put in in anyway rather than return the converter as I was in a hurry. Doh! Figured since it wasn't binding that I would be ok. Guess not, just took it 3K miles.

I'm figuring I toasted the pump. Thoughts? Total rebuild time? I figure the converter is not worth sending back for a rebuild/cleanout. By the time I pay for the rebuild and shipping both ways I'm close to cost of a new one (~$275)

Pump and gears are shot! Converter clearance caused the pump to wear and loose pump pressure ! I would take it apart and refresh it with a new torque converter and cooler . Good luck and let us know what you find . 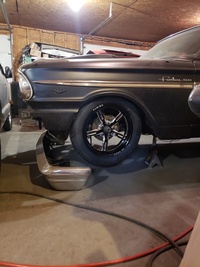 I would pull the pan, and check the bottom for metal first. I would also check the valve body bolts to make sure they where all tight. It's probably not the cause, but worth a shot.

should have added a second block plate
Frank

If it was tight to start with , not looking good

I agree, have been this route.

Update...finally got time to pull the trans. Haven't taken it apart but it looks like the pump gears are broken as best as I can see looking down into the pump. No metal in pan or in converter, but converter neck was blue from heat with fluid cooked inside the neck. End of the input shaft was galled from pushing inside the converter. Converter neck is galled a little on the outside.

I checked the stack height on the converter from to top of the neck to the pads that go against the flexplate. Measured 5 7/8. I thought this measurement is correct? What could cause the no clearance issue? Is it possible to put the gears in the pump backwards? Converter fits easily into the crankshaft.

Just trying to figure out the cause. 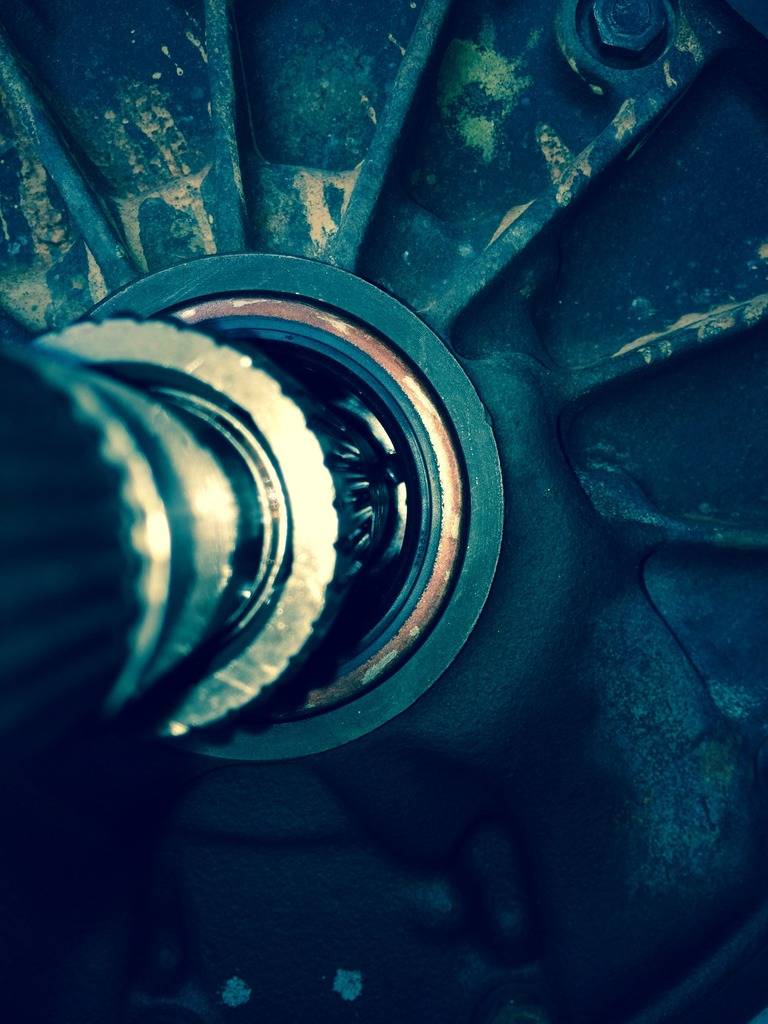 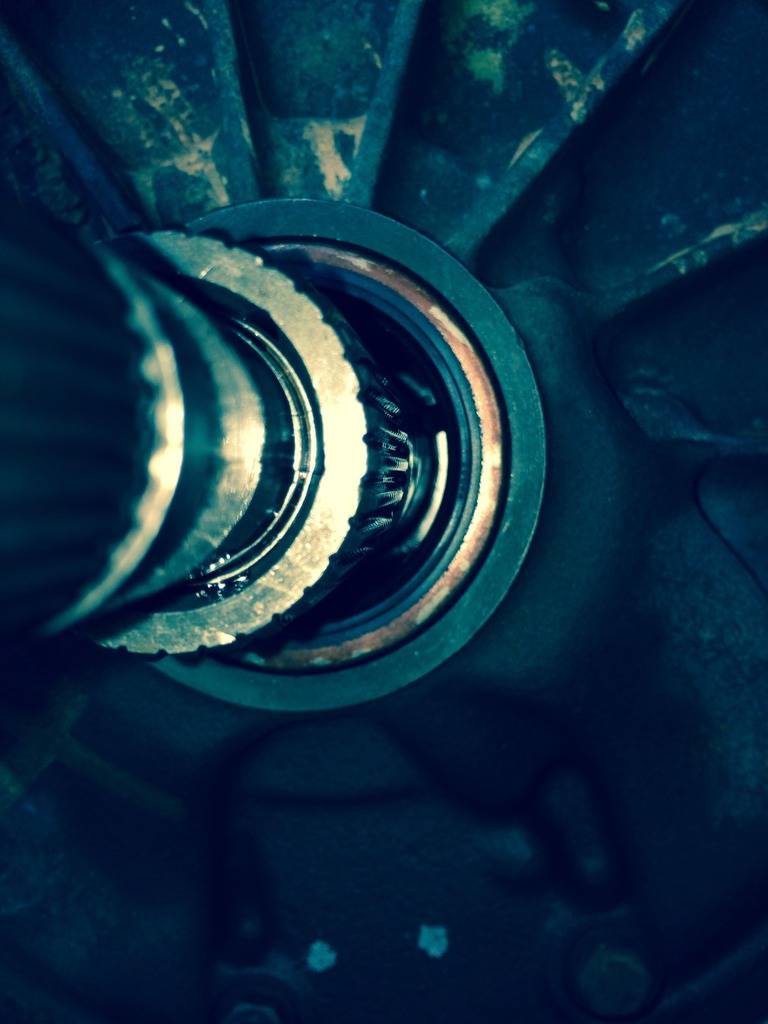 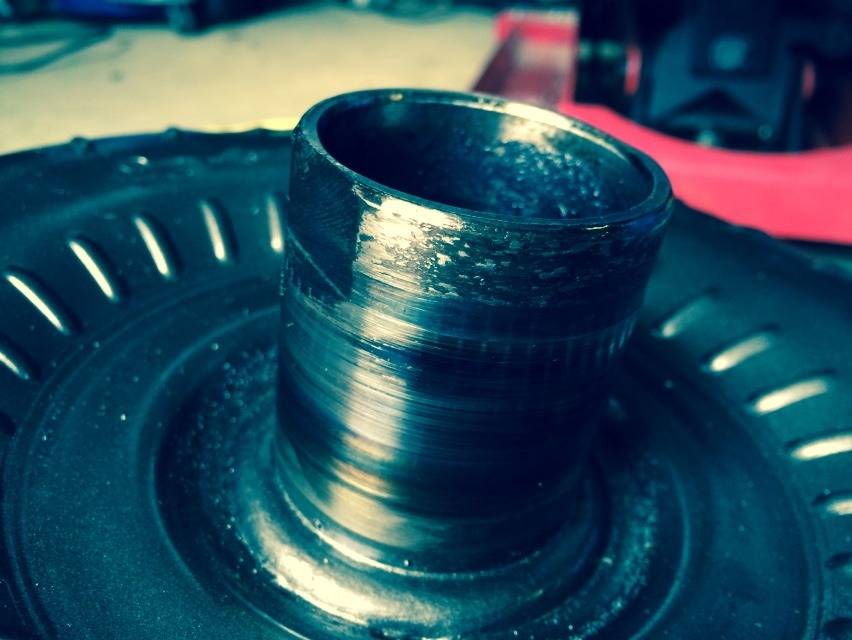 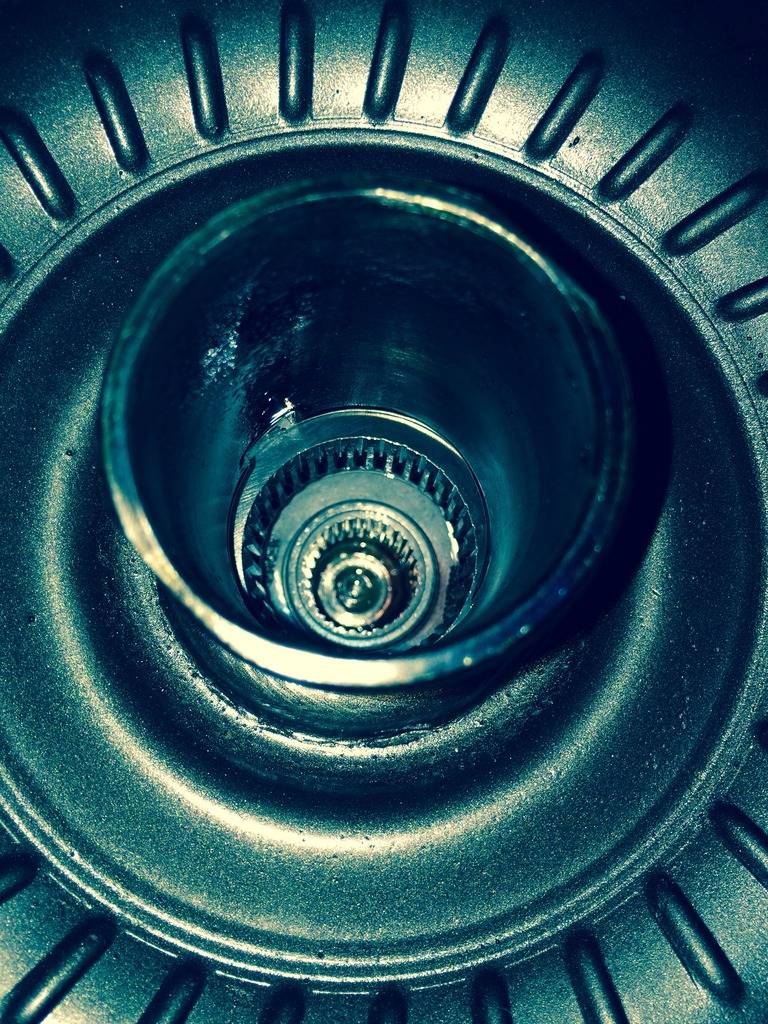 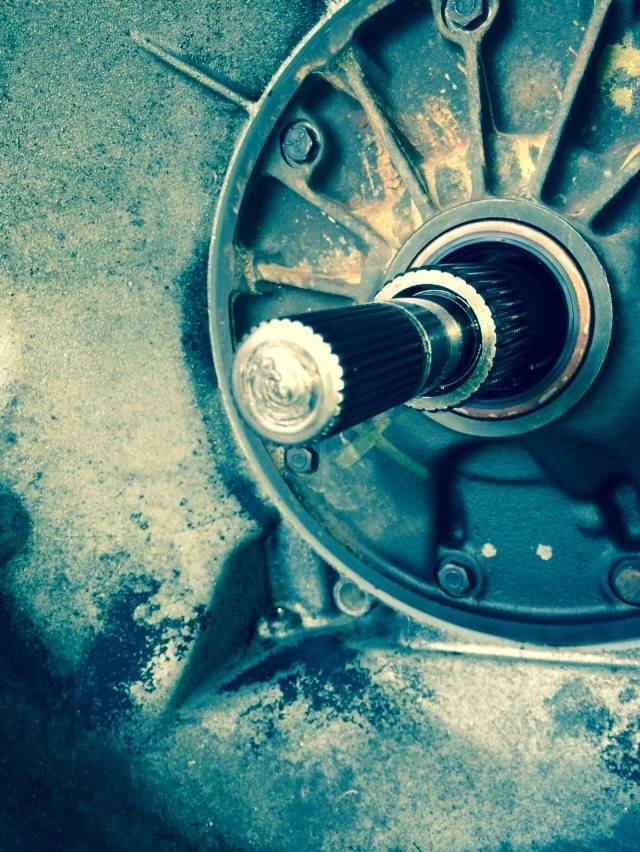 Got one of them newfangled 3 pc driven gears lol

the driven gear was not in backwards, just broken.  The large gear WAS in backwards.  Chamfer and dot facing to the gear of the trans.  Supposed to face towards the front.
The band and drum where burnt, but not scored.  The pump body looks preety good, but is a little rough where the bushing comes through.  Stator half looks ok. 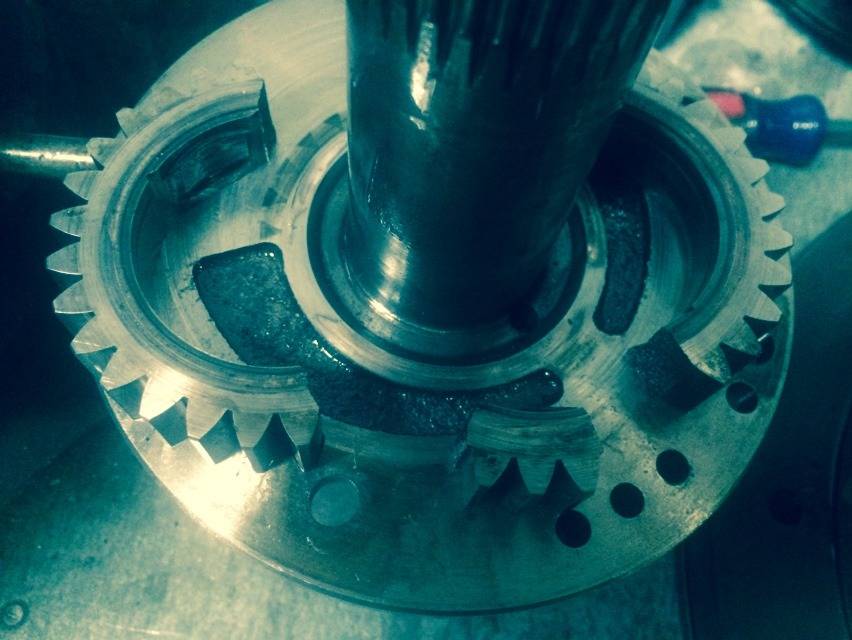 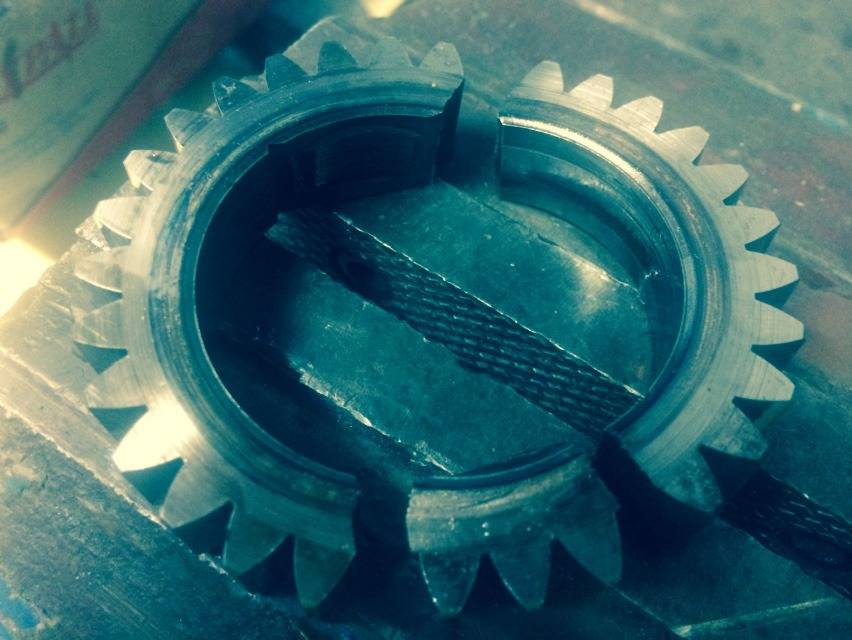 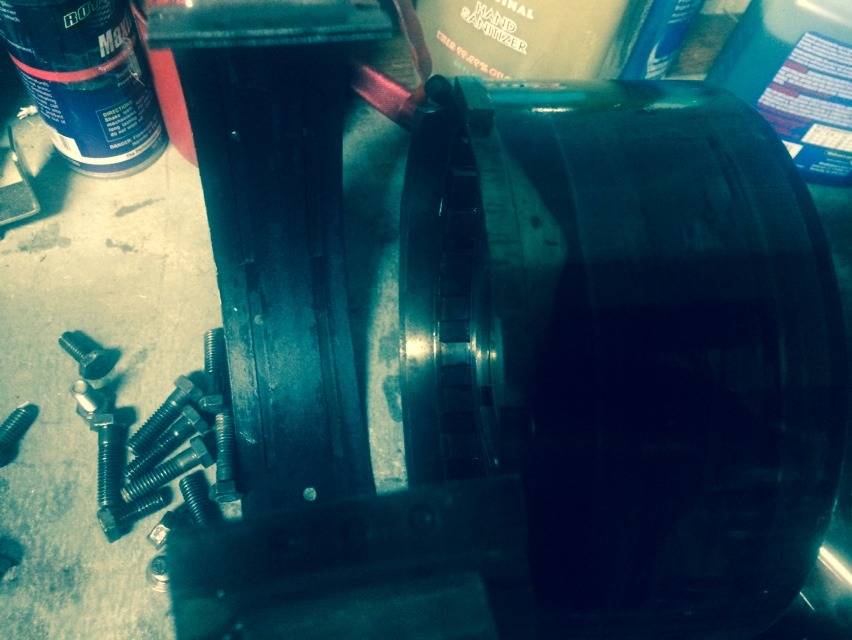 I took a TCI convertor I took to my local rebuilder. He put it on his lathe and showed me the runout on the rear hub. It was off pretty bad and he cut it off and replaced it with a new hub durning the rebuild. Someting to think about. As for as your pump, you know you have a problem there also, the gears have dots and bevels for a reason. I would scrap it and pick a core and go through it myself. Alot of the C6 cores I have seen looked almost new inside and where cheap, so yours would not be worth rebuilding. It seems like you have a combination of problems, which makes it harder to sort out.

I agree, have been this route.

Just went through this. Had to cut a second plate in half to keep the starter in the right place AND get the correct clearance. Two plates on the block gave me exactly 1/8" clearance. This is critical.

Getting in a hurry and hoping it works out simply won't work here on converter/flexplate spacing. .100-.200 is the minimum to maximum acceptable limits by most converter buliders. You really need to be somewhere in the middle to be safe. Most recommend .125-.1875(1/8"-3/16").

It's all back together now. Rebuilt it myself. Runs and drives fine. Put a Hughes 12" 2500 converter in it.

Turns out the guy I paid to do it last time didn't know what he was doing. I already mentioned that the large pump gear was in backwards. Also found the band hadn't been replaced unless it was a reman. Ford emblem stamped on it. Pretty much, his "rebuild" was a set of clutches, piston seals and not much else. Lesson learned.


The biggie and why the converter clearance was not enough: Input shaft was in backwards. It was sticking too far out and bottoming out in the converter. That was why the pump was not chewed up from insufficient clearance but the end of the shaft and bottom inside of the converter were galled. I got the trans from him this way and just installed it without catching it.

Glad it's all good. I Hate it when someone sells you something that's supposed to be good and it becomes a headache because they didn't know what they were doing.

Good to hear you got it all sorted . That outer gear in backwards wouldn't cause the issue IMO. Have pulled down a few over the years like that ..

And to talk about building things wrong. Rebuilding a C6 now with very little use , the original builder couldn't have got it more wrong if he tried