IV. The standard Ford Production Heads;
In this family we have several heads including both cast iron OEM production and aftermarket alum. heads. I'd suggest that the pecking order would be;
1. FRPP Kaase designed SCJ and the soon to be released Kaase designed P-51 head.
2. The Blue Thunder "B" head which is the one with the raised exhaust port and the Chevy style flange pattern.
3&4 (tied) Blue Thunder with the raised exhaust port and Ford bolt pattern, and the TFS Street Heat head, again with a raised exhaust port and Ford bolt pattern.
5,6,7,8,9&10 Big log jam here, but we have the old Ford A-429 heads, the Blue Thunder CJ head with standard exhaust port location, the old style TFS CJ head, and the three different versions of the Edelbrock RPM/CJ heads.
11,12&? We have the cast iron production DOOE-R CJ head and the DOVE heads along with others such as the Police Interceptor head and etc. I am not saying these cast iron heads are any worse than the big batch of alum. heads I listed right above. They just heavier!

Probally more importantly than the pecking order of the heads is who you choose to do the valve job, the porting and flow testing of the heads. In other words, the quality of the work. I have a seen good quality Blue Thunder "B" heads outflow poor quality EX 514 heads for example and they are in two different families. What I'm saying is, a head that is lower in the pecking order, can surpass a head that is above it due to being properly prepped.

I wonder which heads the new AFR 460 heads will push down on the ladder. They will move things around guaranteed! 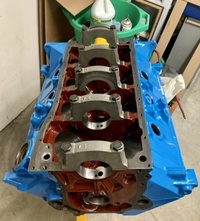