I will. I am trying post the flow numbers. This posting picture stuff is tuff.

I'll text the flow sheet to you Blake if you want to try and post it......I couldn't get it to upload here either. Charlie texted it to me and I can't do squat with it other than text it to someone else.

Should add this build is an open book. Ill share whatever info I have or Chris wants to share as its still a custom street build. The heads are new but I am the second owner. I bought them after talking to Charlie and for what they were sold to me for I could not duplicate them. So I got a set of ported heads with a flow sheet because they were for sale at the right time and looked to be suitable for what I was going to do, and very budget friendly. I dedided to spend a little more money in the lifter package as a trade off and also felt that the current double valvesprings were usable as I had not yet switched out to lighter version anyways. Again, this thing will never see the track other than driving to and from and spectating. The reason I opted for the hydraulic roller was the longevity and not having the fear of wiping lifters during the break in period or shortly there after. I want something easy on the valvetrain, good street manners, I can hit the starter and go. Its turned into a frame off restoration, with a lot of suspension and brake upgrades to make it a cool lowered 3/4 ton 2wd driver.

Blake if you would post the flow sheet that would be great. I've got the cam numbers figured out and will post them but better if we had flow sheet first.

Sorry got busy and then the holiday I had to bug out early on Friday. I emailed flow numbers to Blake. 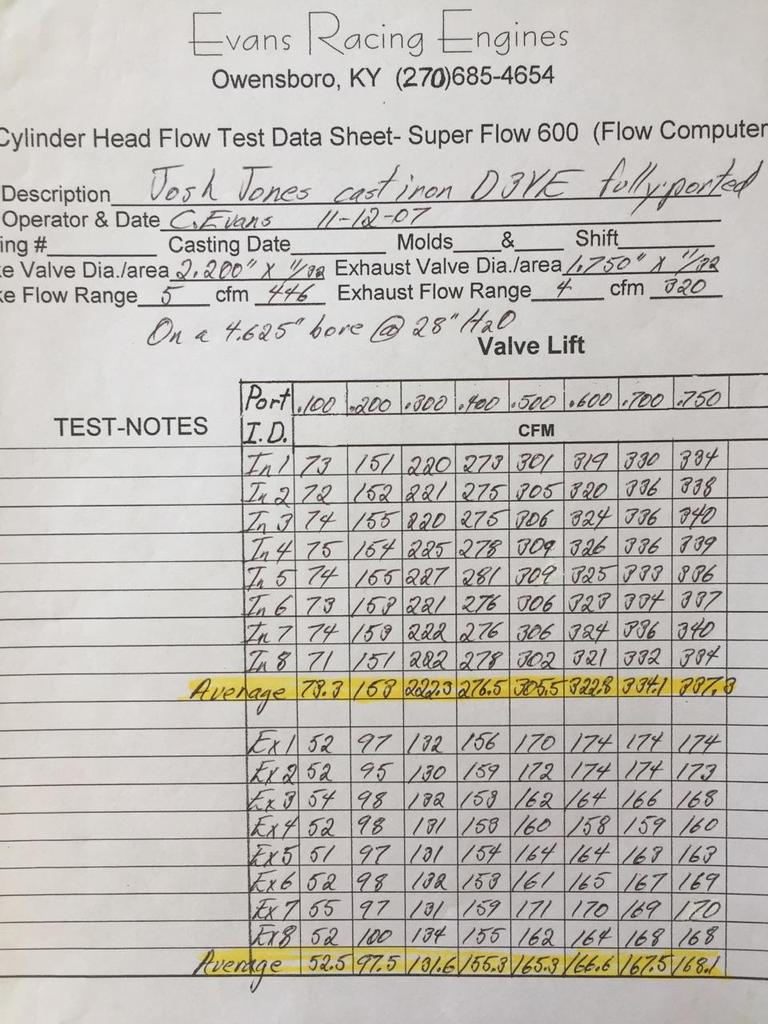 Sorry I missed this. Travis had posted them. The above the numbers at .500 shows we have an I/E ratio of 54%. This is a low rpm build base on the customers goals. It is also a street build. On the street average power is king and one needs to be realistic on where the engine is going to spend most of its life. A project like this is going to see 2200 to 4500 most of its life. I will sacrifice some top end HP to give the customer a wider broader powerband in this area. Since duration is the ability to sustain power at a given rpm I base the duration numbers on the the mid range rpm. Since lift is the ability to make HP I base the lift on the max HP rpm. This trend is not new. As cylinder heads have gotten better we have seen duration numbers go smaller and lift number move up. A more efficient head need less time to fill a cylinder and it can do it quicker if you let it.

I've said that at 75% I/E ratio the duration numbers at .050 are equal and as you go below that you favor the exhaust side. I also have stated things like piston speed will affect this. We have 54% I/E ratio in this build with a low piston speed number. So here is what I have put in the engine:

So what's the power guesses for this with said spec camshaft and wherein the power band will it make what? Just curious.

PI heads are probably the best all around OEM head they cast for a street build.

Camshaft is shipping to customer.

Do not soak in oil, don't do anything but wipe them with a lint free cloth and put a little oil or assy lube on them before you install.

What brand, p/n, hyd roller lifters are you using?

What brand, p/n, hyd roller lifters are you using?

Is there any significant difference between the Morel 5325 and the Crane 35532?
Is one preferred over the other for street application?

4604X4 wrote:Is there any significant difference between the Morel 5325 and the Crane 35532?
Is one preferred over the other for street application?

Since Comp owns Crane I have no idea what their parts are like anymore. I know we have very good luck with the 5325 with street strip applications.

Fired it off for the first time this evening. Sounds great. Got some electrical issues in the factory wiring that needs someone smarter than me to address.Went with gm 1 wire alternator and I'm thing it's back feeding some stuff. Got a wiring guru who can figure it out sometime later this week.

Thanks for the help.

Im glad it started up and sounded good. Genrally speaking those one wire alternators need a diode installed in-line in order to stop the back feeding. I hope this helps, but go with what your wiring guru says, because I'm not an electrical guy.

Your probably right Charlie. Truck had a run on issue and also I have a dome light staying on now that only works off the headlight switch itself if you turn it to the left, no door switches / contacts as the truck is as plain as plain gets. I think a custom would have been a step up from this.

New msd 6al digital, and coil, starter is also new off of a 1996 460. When I cranked it over without ignition box wired up, starter engaged and dis-engaged fine. After I hooked ignition box up and started truck, seems like the starter is staying engaged for maybe a second and a half after the truck fires. Got something bleeding power or back feeding power to some items.

Piddly stuff now. Motor is nice and smooth, no funny noises, no leaks, and moved under its own power, when I let the clutch out.