Man that is some nice workmanship! Good job Travis!

very nice work I do love these cars. definatly looking forward to seeing more progress. what do you have for plans as far as a engine for this old poncho?

Those welds are all works of art!

Looking very good Travis.Can't wait to see it at the bash!!I'm glad you posted those pics.Keep 'em coming.Makes me want to go out and wok on my Falcon,Thanks.---RED

Thanks guys. Randy is real happy with the way his car is turning out. Today I hope to finish the cage, 6:40 AM guess I better get busy

very nice Travis! like everyone else said pure craftsmanship! The 63 Tempest was my favorite Pontiac. I love Nostagia drag racing!

Well finished the cage, tin work , foot boxes, and new frame connectors. Also completed all the welding underneath. everything is custom bent for the car , no kits here. I think its got a pretty good stance. Randy had to leave to run a tow call this afternoon and has not seen it on the ground yet.

I still have the door bars to install, and once the engine and trans are fitted then I have to modify the tunnel. Randy is taking it home to do the engine mock-up and the sanding and painting of all the bars and tin work. The car will also be getting a full interior, including the back seat. 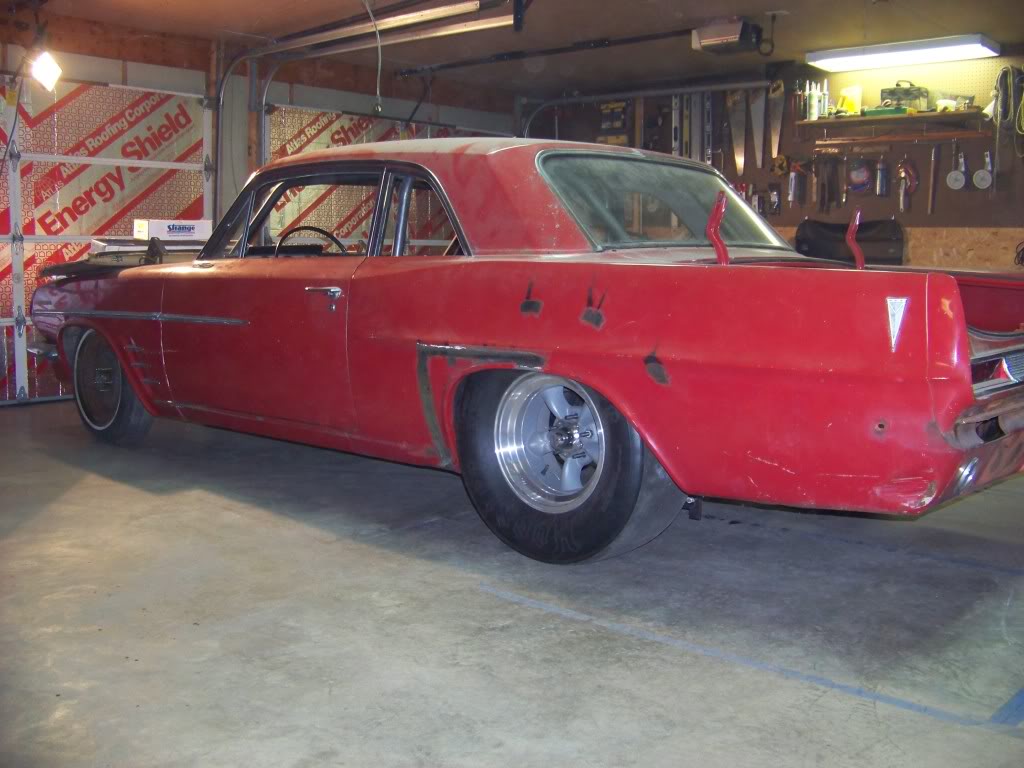 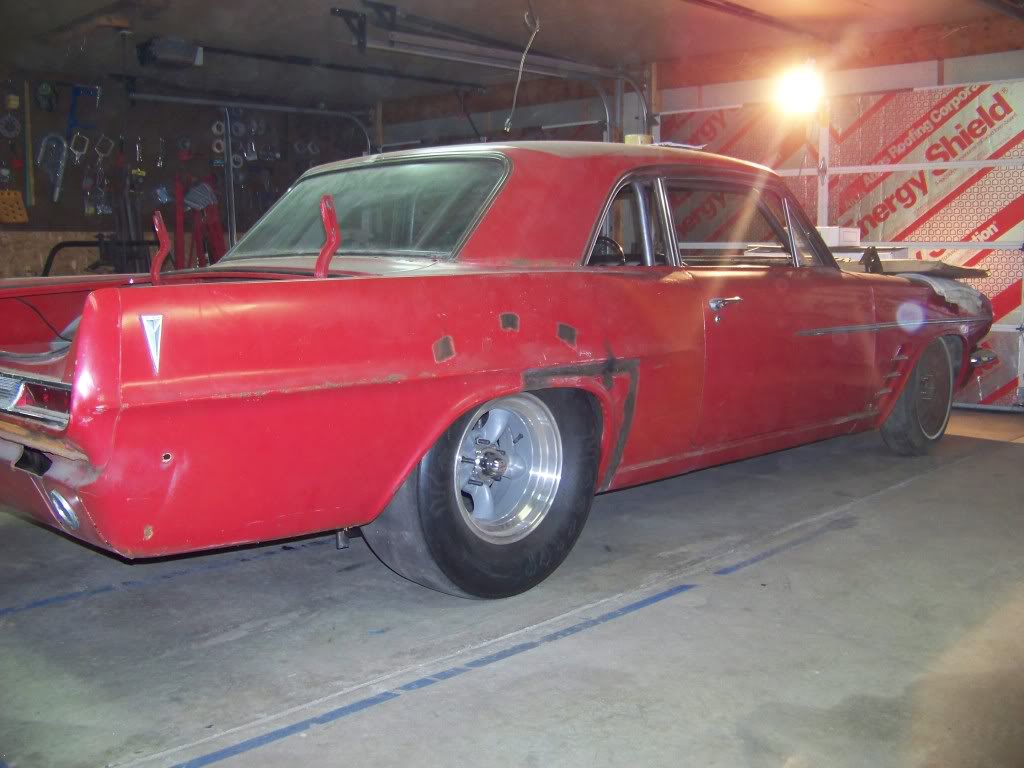 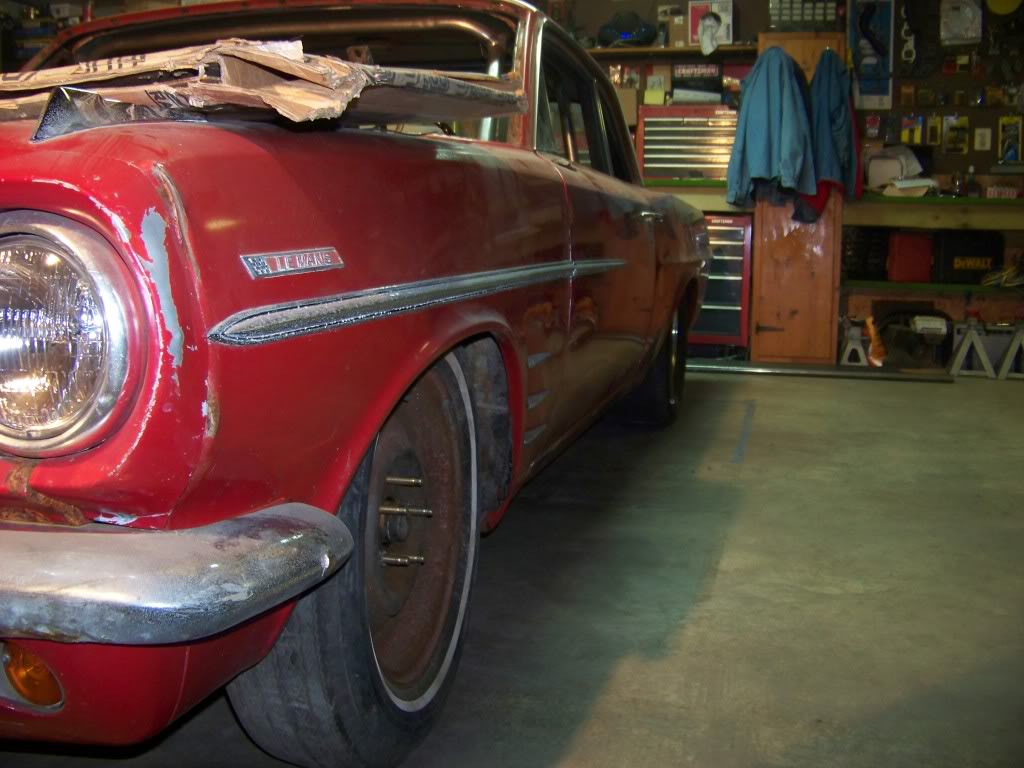 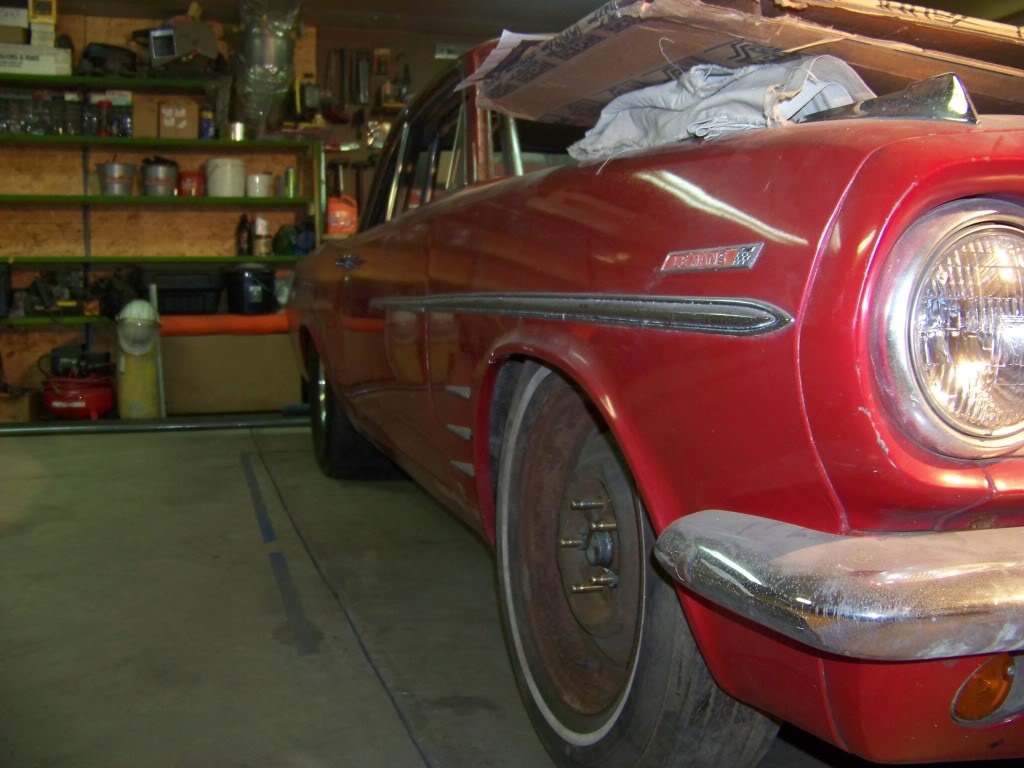 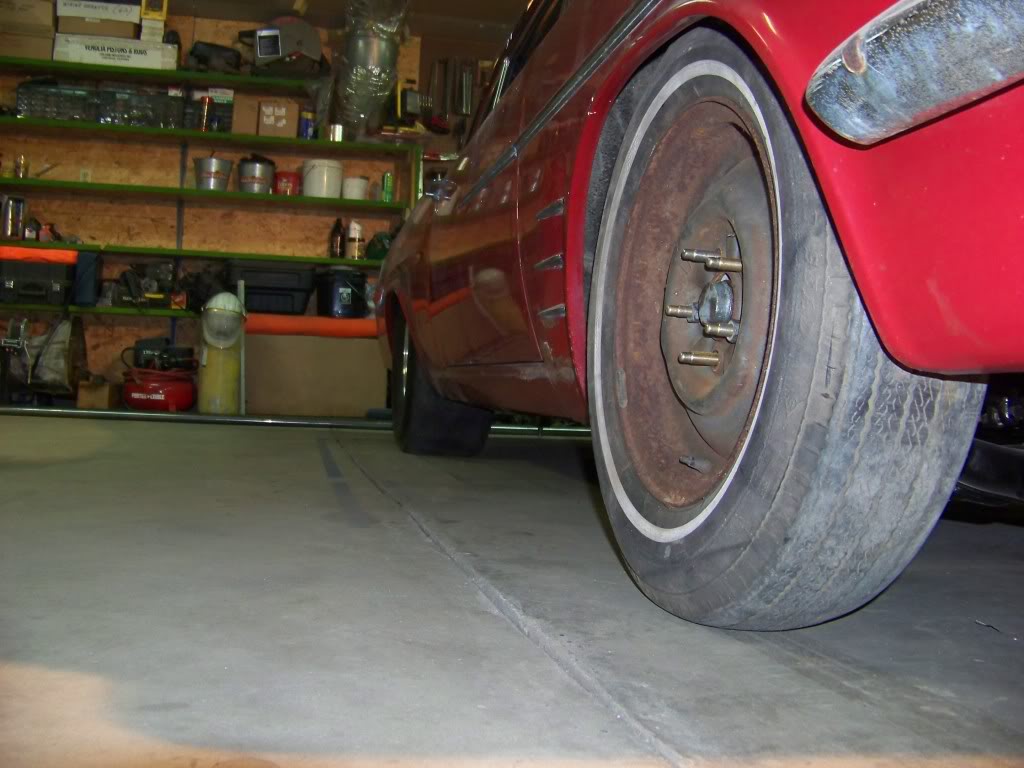 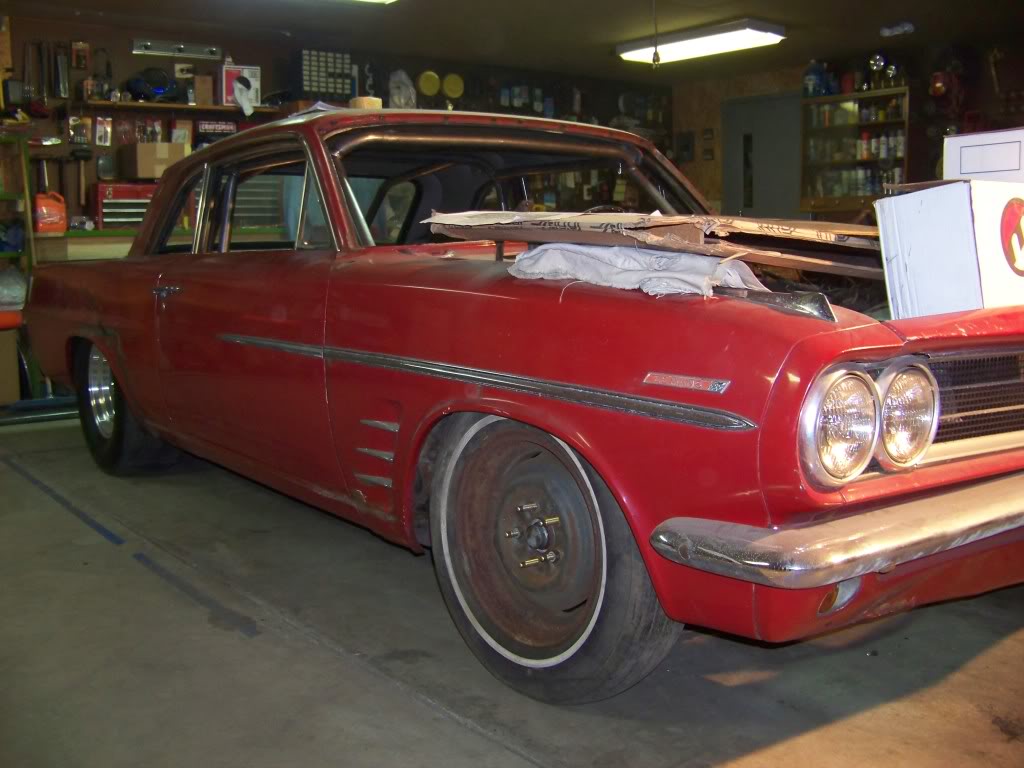 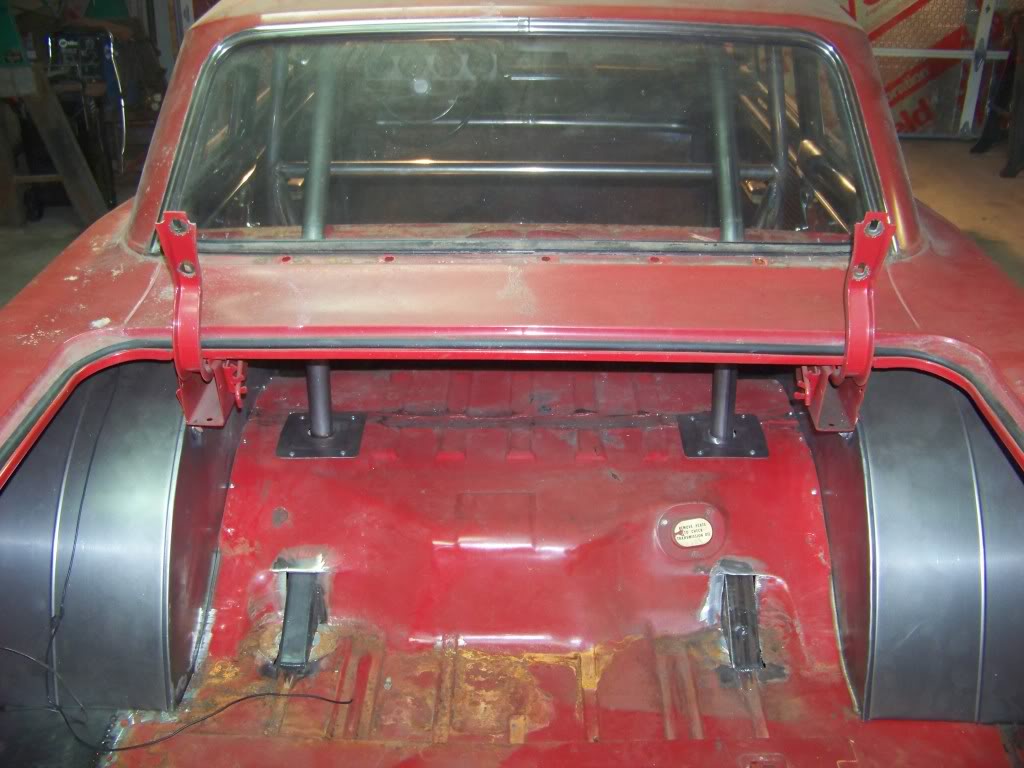 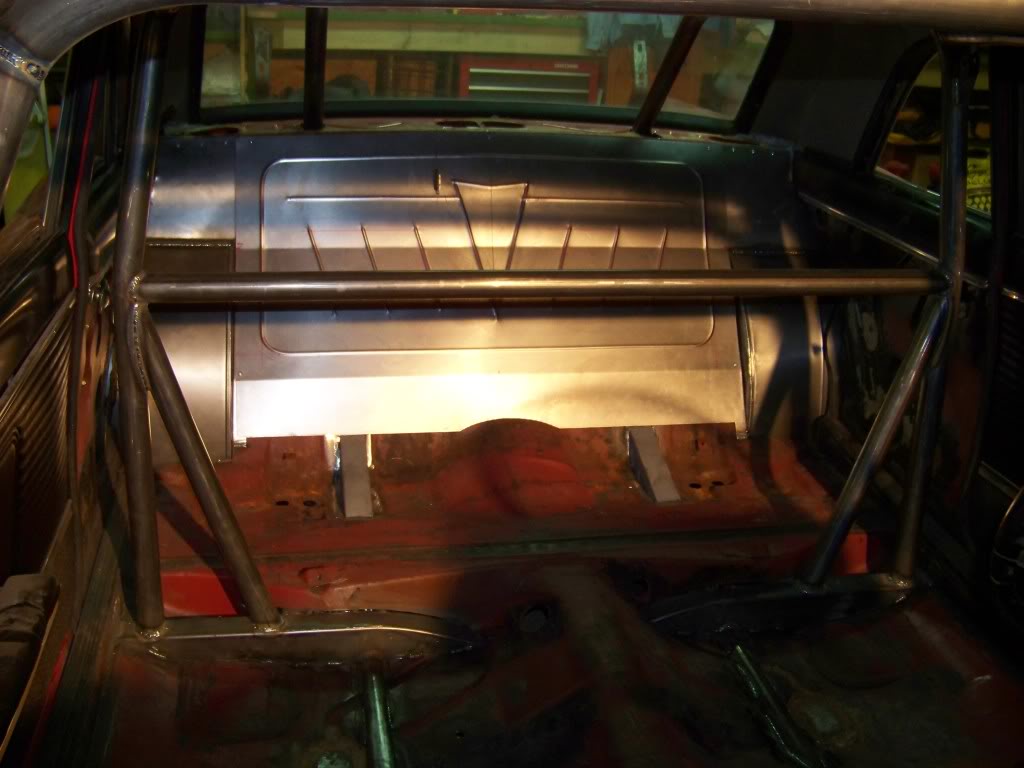 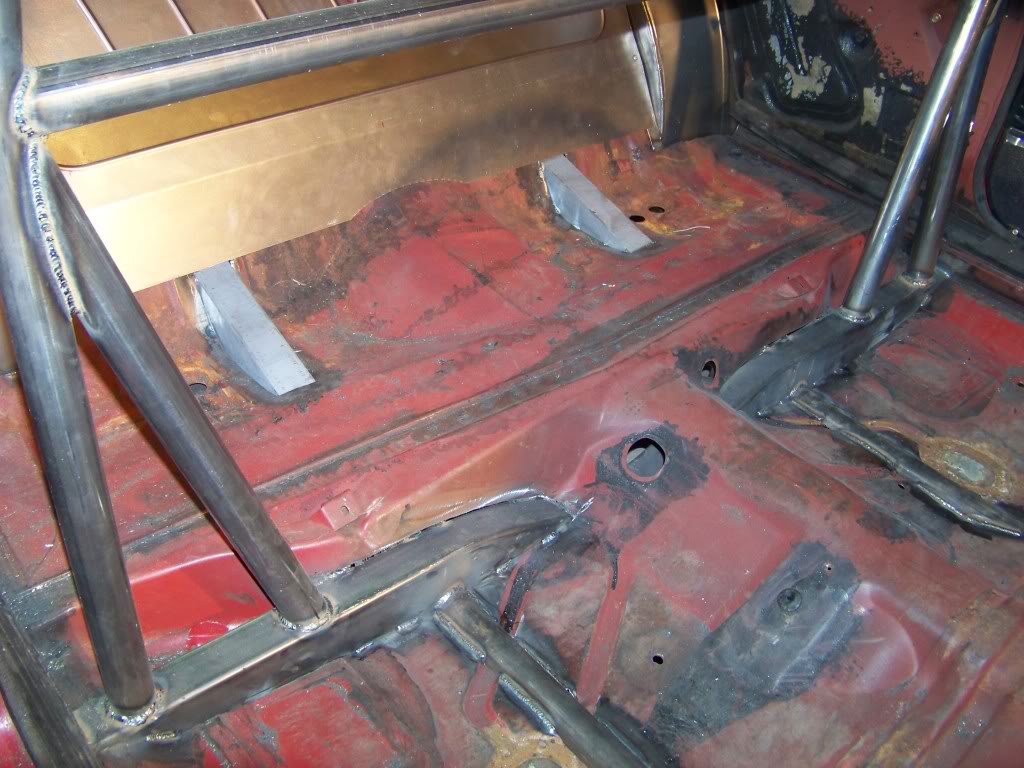 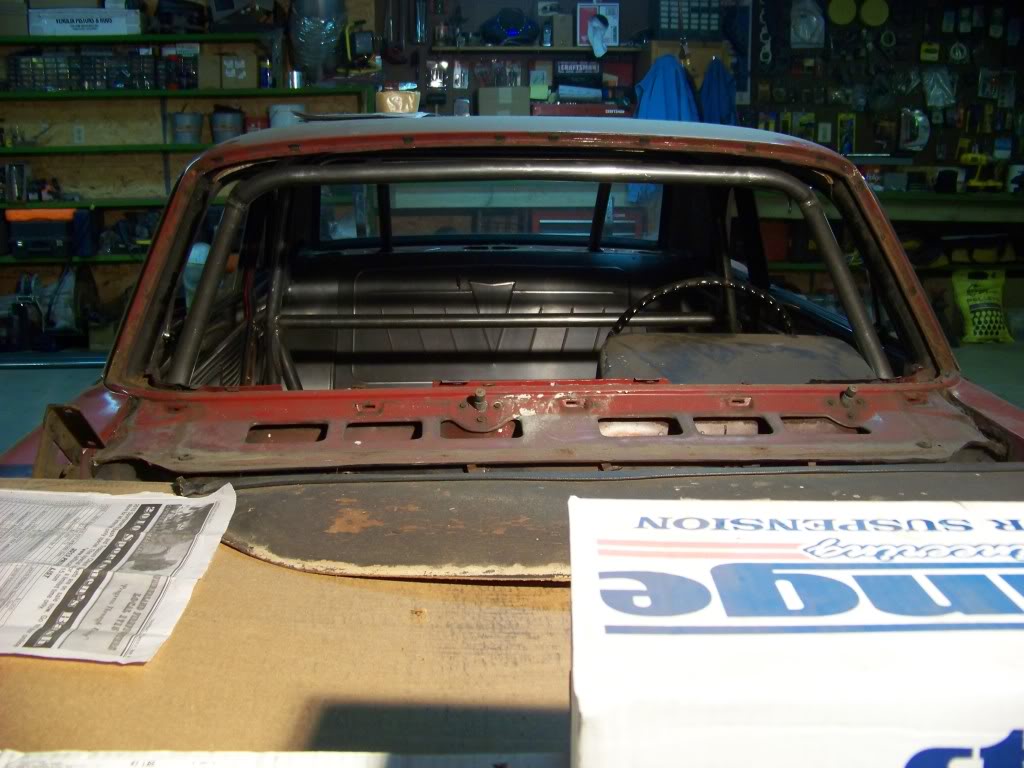 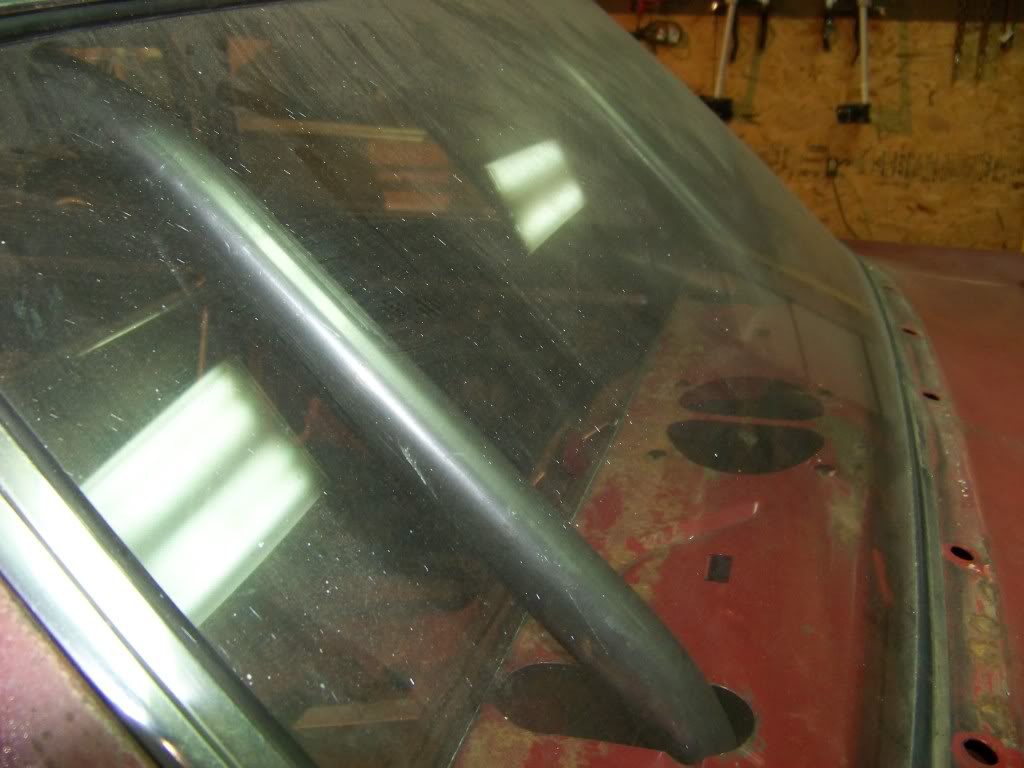 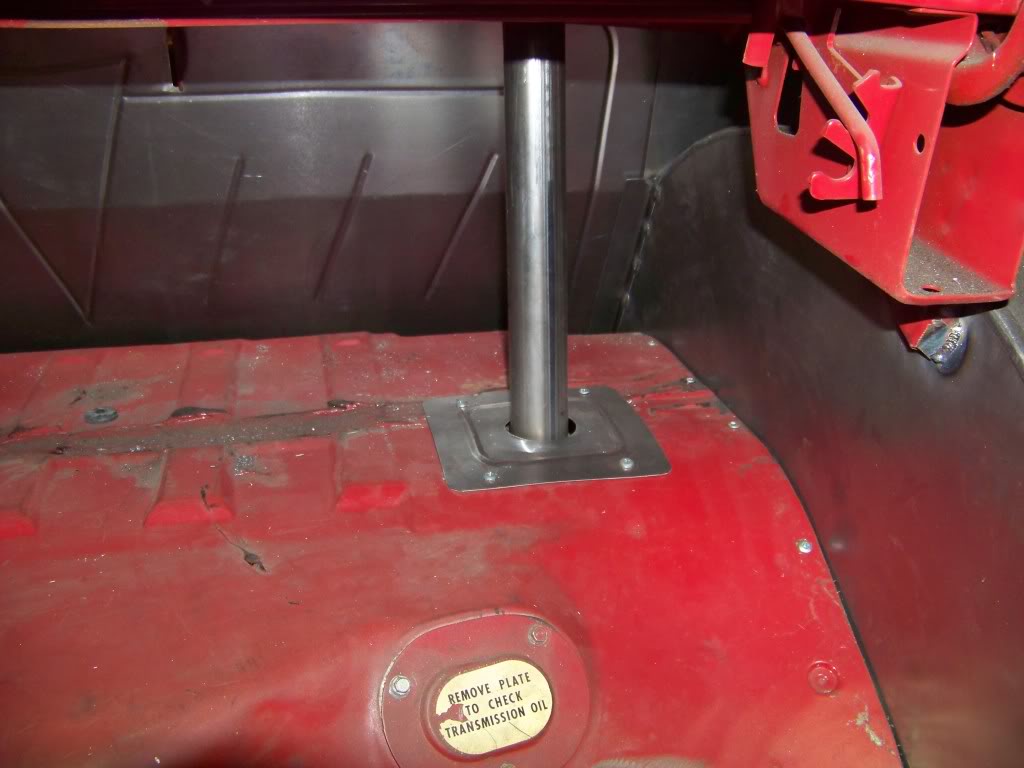 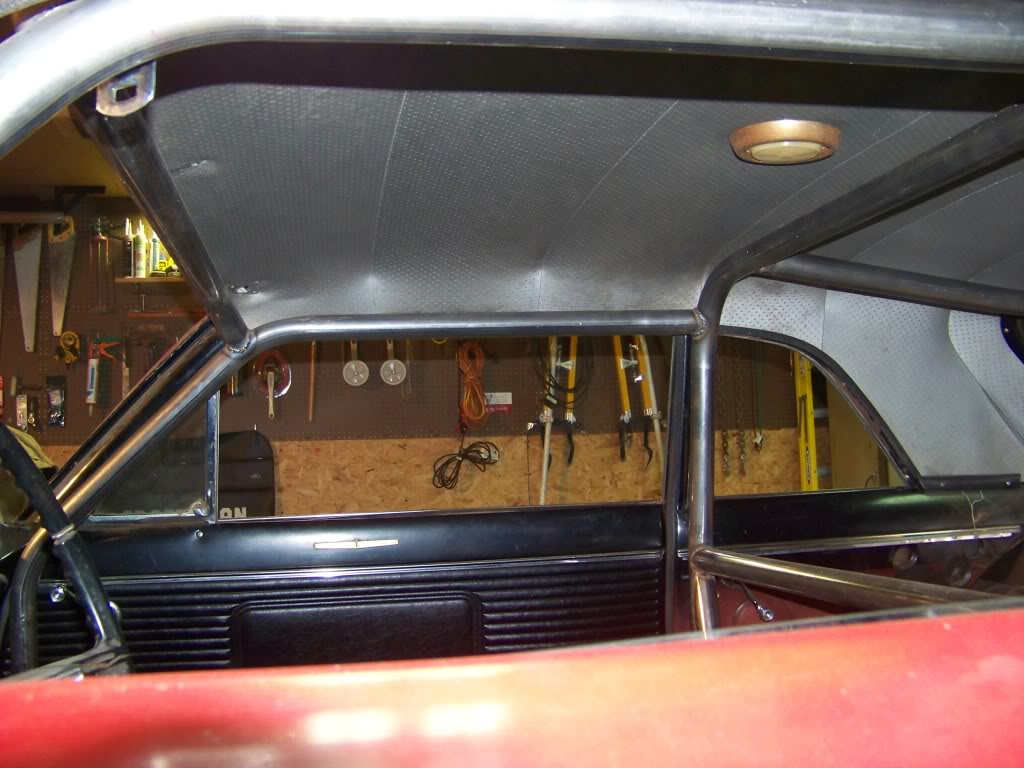 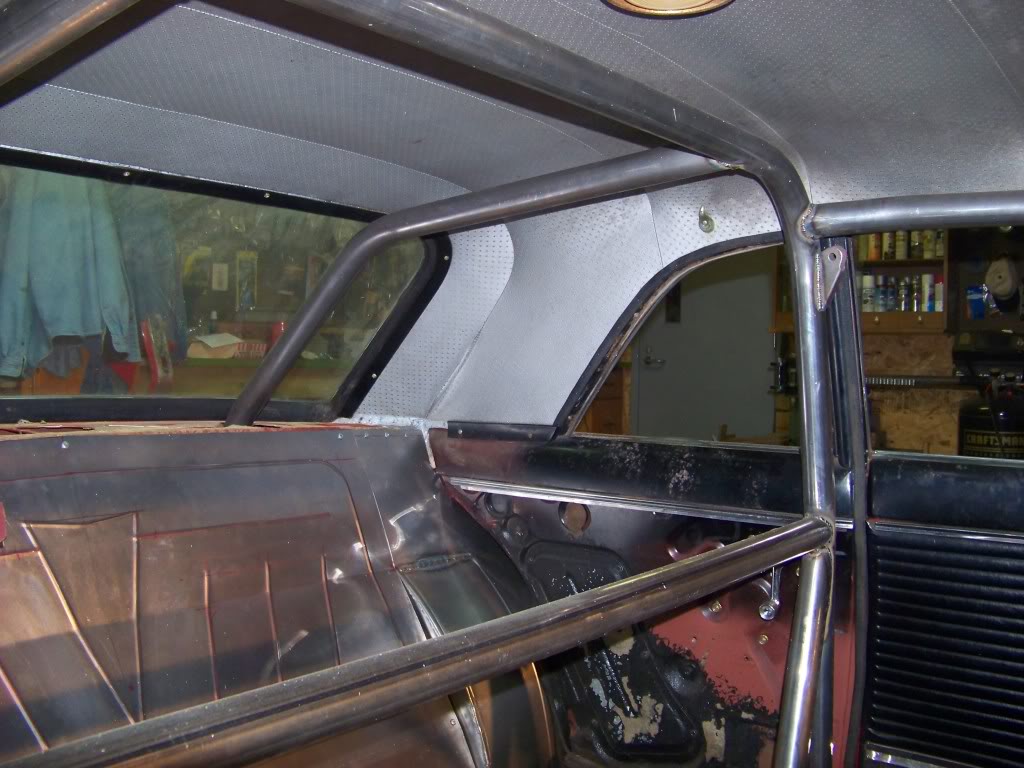 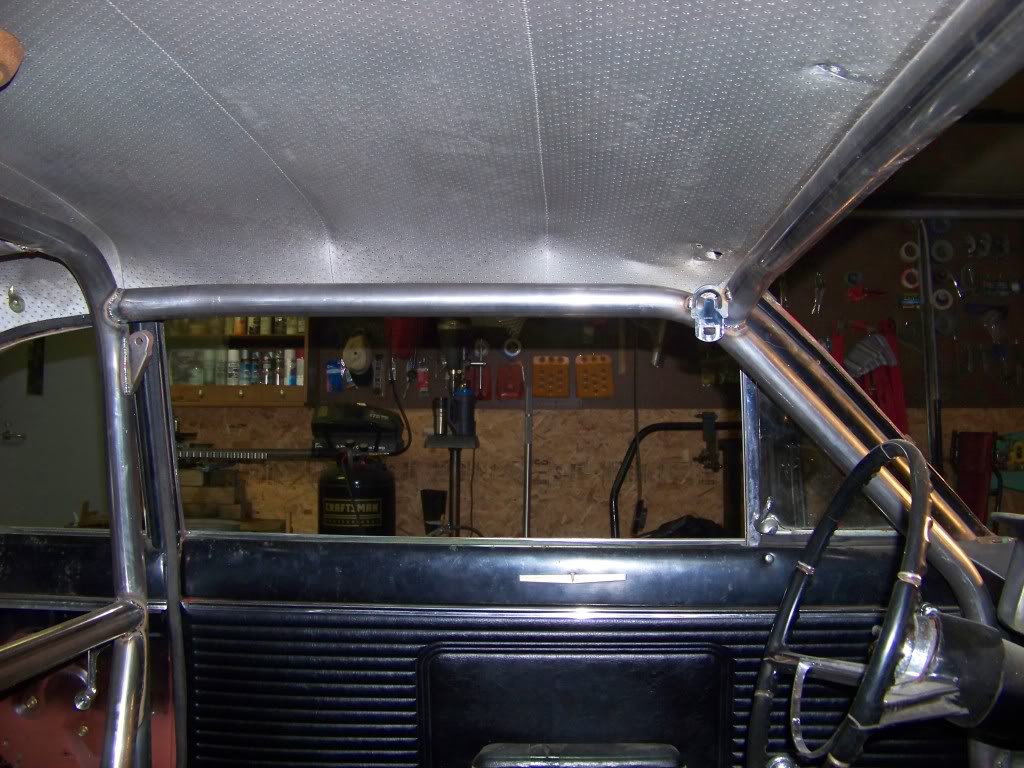 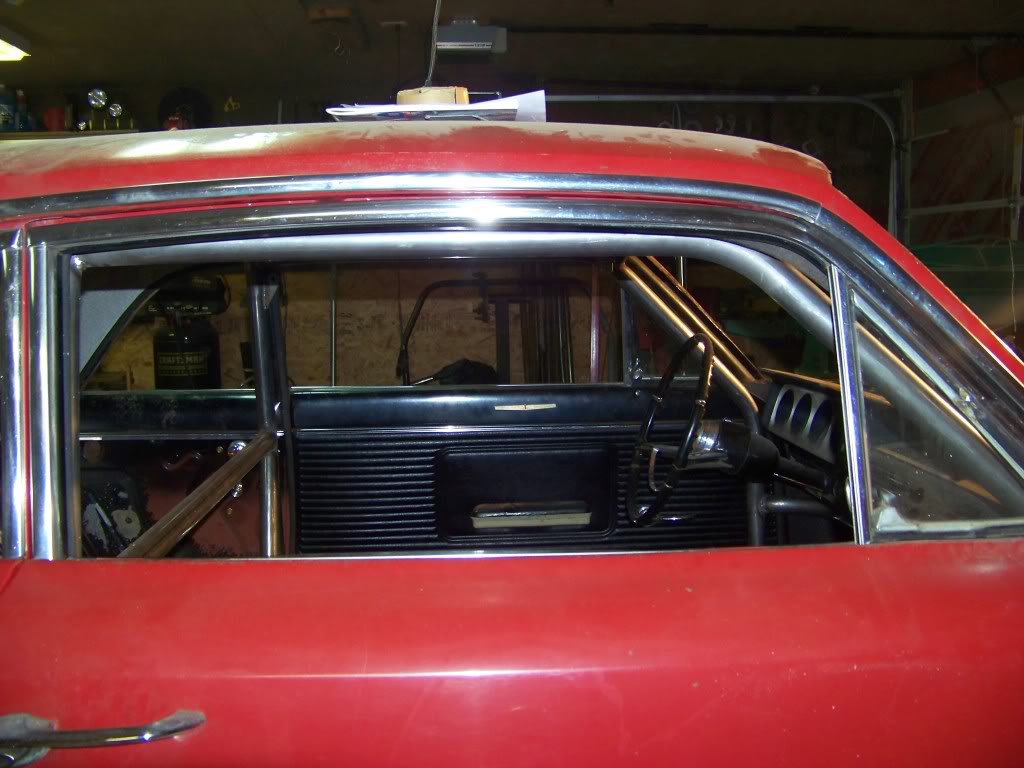 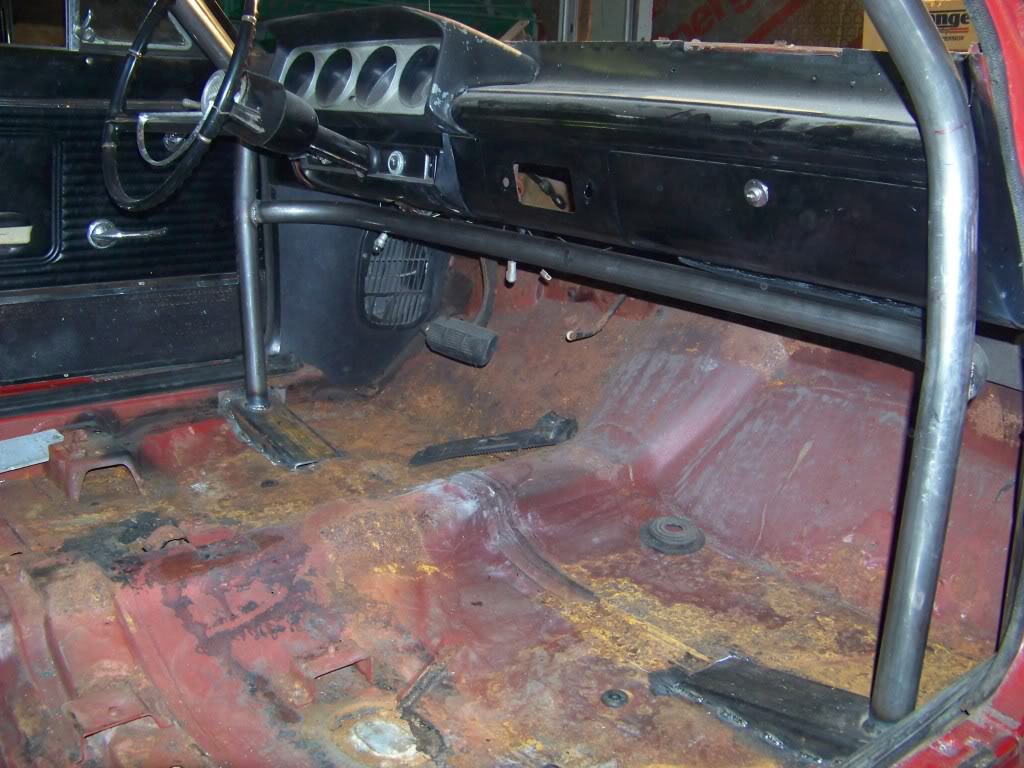 , how do you check transmission oil under a plate in the trunk? Did they mean differential oil? I don't remember them having some kind of transaxle in them . It does have a trans tunnel up front, but not a very high one.

Nice work Travis, your giving me the chassis fabrication bug again...............gonna hafta hunt up somthin to cut up now

OPPS, sorry, I guess if I would have read your first post, instead of just looking at your pictures, I would have known.

Talked to Travis last week about the Tempest,I guess the owner has a Baddass powerplant for it.

We need some current pics..... this is a way cool car.

so here is the links to some really nice pics and article info, makes for a great read ....

I saw this 63 Tempest on YouTube the other day got love those turbos!
https://www.youtube.com/watch?feature=player_detailpage&v=Ad8g9IfWxKI#t=36s
Dave

Sometime after the first of the year Randy is bringing the Tempest back out for a set of headers, finish the side door bars on the cage, and a few misc little things he wants done. Since the last pictures the car is all but ready to paint and looks even better all one color primer. We have also fabbed a removable trans tunnel as well as a permanent tunnel for the driveshaft. These cars have almost a flat floor board in them since they are a transaxle deal with a rope and tube style drive line coupled to a straight stick bell housing. This car was a challenge to say the least. The rust free body and perfect floor boards made us want to save as much of the original sheetmetal as possible. So laying out and cutting exactly no more than needed to have gap free fitment was time consuming to say the least. But it is pretty well thought out and the car has a killer stance that made it all worth while.

The powerplant is a 462" all Pontiac engine. This combo is a very simple piece and is currently in a 63 Catalina which is a honest 4400#'s. Last two years he has been running a all out Pontiac series here with this combo in the Catalina and a set of iron Non- Ram Air cylinder heads, total stock suspoension and a 30X9 tire. He managed a personal best of 11.29 in mine shaft air with this combo. This summer he made a cylinder head switch to edelbrocks that were worked on pretty good by some Pontiac guru. Only change was the heads, pushrods, and headers because the old stuff would not physically bolt on and work. Same everything else. This netted a BIG gain ......................10.70's and in not near as good of air as the 11.29 hail mary pass. This little 63 Tempest should weigh in around 2900-3100# so it should flat out get it.

On a seperate note. I found a 62 Tempest that Randy and I are going to old school staright axle 4 speed, and clone a factory backed race car of the 60's and make it perfectly street friendly to actually drive and just have some plain good fun in. It is a joint venture and should be rewarding in a differnt way too.

I'll post more pics of this project after it gets here in January.