David Willingham wrote:Very nice!!!!!!! I wish I could get you a nice used billet blower to go on there that wasn't hardcoated. The straight alky deals don't like bare aluminum

I guess its getting a little closer, brought it to the chassis shop today

yeah, its actually on the intake..

yeah, its actually on the intake..

I definantly need to start putting my contacts in

I can still see its utter beastage lol

should have some updated pics this week, its a rolling chassis now, trying to get it ready for powder coaters. Might put it in IMIS if we get far enough along. Andy and jack have a ton of little brakets to weld on to it, it's tedious work... chute handles, throttle cable brackets etc, etc.
going up to andys this week to bring the new blower snout and other parts, we moved the blower back and had to get a new snout. Now andy will have to make the lexan go around the blower.... wheels are on it now parachute mounts on. Ordering a wing for it this week. still a long way off but at least it ROLLS!

We would LOVE to find a Big N ugly for it! 10.5 tall with the larger B flies. thats why my buzzard is up for sale.

BTW if you decide to build one of these Call Andy and if you do be ready! nothing fits its all one off shit!

f250mike wrote:X2 what Lee said but I want to see the new car

That's going to be one sweet ride Jerry!

Nevs wrote:That's going to be one sweet ride Jerry!

Nevs wrote:That's going to be one sweet ride Jerry!

Who's building the car?

Jerry, you gonna run gauges or a Racepak dash? 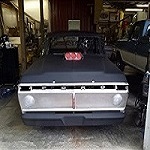 Neither one? we have a complete data logger from RPM that I got from Robbie Sapp off his blown alky Pro Mod. I know they are working on a dash for their stuff. last I talked to them it was almost done.

its got inputs for a flow meter, 8 egt's and I'll be running an output from the shock box to it.

We are going to put a Tach and an Oil Pressure gauge in it, thats it. If RPM has a dash we might look into it.

Really from the folks Ive talked to, in a Pro Mod car you dont need the dash other than the tach to do the burn out. and the tach is nice to tune idle with. Other than that you dont use gauges that much. there's no water, and the data logger gets all the other data. You dont really look at RPM going down the track, it's shifted with air from the computer either by time or rpm.. That Race Pak Dash is REALLY nice! it would be super in a top sportsman car for sure. I'll probably be too busy sewing button holes in my ass cheeks going down the track to have time to look at gauges!

We will be getting one of those Power grids, which makes me wish we had a race pak cause they interface.
the real advantage to the interface is only having to download once. Other than that the RPM stuff is equall to the Race Pak, they just dont have the dash yet. or they might, havent checked in a few months.

the shocks will be programed with a digi set timer, mounted next to the shock control box.

The new MFI Pro will do everything, just in case you should ever be interested. It will run the shocks, run a dash, datalog, fire your mag, EFI, has g-meters, etc. I plan on posting pictures and info about it soon. I am waiting on the modules to be finished for mine.

MFI PRO From GoTech? need more details on what it will do.

hey David, why not send one of them fancy billet blowers up here for IMIS.

No, the MFI Pro is designed, built, and tested right here in AL. I designed and built the billet box, Alan Dudley does the applications and tuning and Patrick Johnson designed and built the circuitry and software. He can make the box do just about anything you need it to do. They have a website, www.mfielectronics.com. Call me sometime and can give you more info.